Abstract
Data Encryption Standard (DES) is one of the most widely used symmetric key cryptography algorithm. Therefore, the susceptibility of DES to different kind of attacks has been a concern since the algorithm was first made public. The problem has escalated to the point that Electronic Frontier Foundation has now built a DES cracking machine, at a cost of less than 250,000 USD, that can find the right key in about three days. Of course, the cryptanalytic technique used to find this key might seem overwhelming for us as students to learn. Hence, we need a simpler version of DES in order to learn about these cryptanalytic techniques, S-DES is the answer. S-DES is simpler version of DES that operates on 8-bit message blocks and 10-bits key. This paper discuss about S-DES design, how S-DES works, and different kind of attacks on S-DES.

Introduction
S-DES is a simpler version of the DES algorithm. S-DES operates on 8-bit message blocks and 10- bits key. It was designed as a test block cipher for learning about modern cryptanalytic techniques such as linear cryptanalysis, differential cryptanalysis, and linear-differential cryptanalysis. The same key is used for encryption and decryption. With its 10-bits key, comparing to 56-bits key used by DES, S-DES is much more vulnerable to an attack. Different kind of attacks that have been proven successful to reveal S-DES key or subset of key are brute force attack, chosen plain text attack, chosen cipher text attack, and known plain text attack. 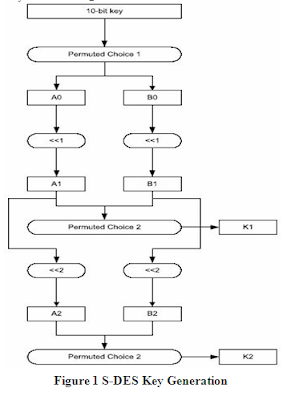 The encryption procedure can be summarized as:

where,
f : key dependent cipher function (will be explained bellow)

Third, L1 and R1 are subjected to second round of key dependent computation yielding L2 and R2, which can be summarized as follows:

Fourth, R2 is concatenated to L2 and then subjected to the second permutation, IP-1 which is inverse of initial permutation. The result of this last step is ciphered 8-bit message block corresponding to the input. 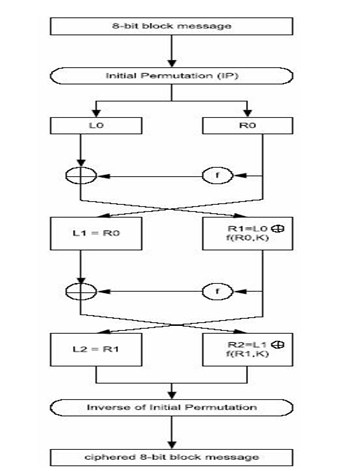 The first step of key dependent cipher function, f, is to pass the 4-bit block input to function E. E is a function which takes 4- bit block input and yields a 8-bit block as output according to table:

The 8-bit block then XORed with the 8- bit sub key, K1 for first round and K2 for second round. The result of this XORing operation is then split into two 4-bit blocks, the first four bits from the most significant bit being C0 and the remaining bits being C1. C0 and C1 are then applied to S0 and S1 respectively. S0 and S1 are S-Boxes which take in a 4-bit input and yield a 2-bit output. 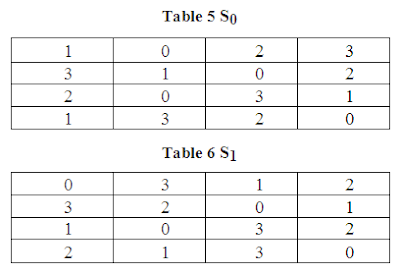 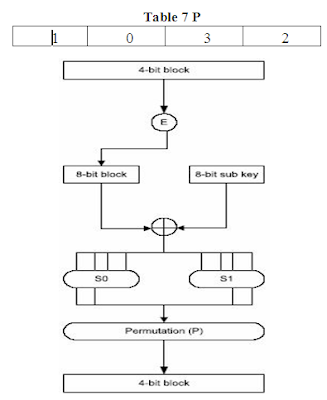 Figure 3 S-DES Key Dependent Cipher Function
The decryption procedure is the same as the encryption procedure, but the sub keys are applied in the reverse order. K2 is used in the first round and K1 is used in the second round.
Attack On S-DES
It is feasible to attack S-DES using brute force attack since it only has a key size of 10 bits. In order to perform this kind of attack, we need to have a plain text-cipher text pair in which we search the key space until the appropriate plain text encrypted with the guessed key yields the cipher text.

Conclusion
In this paper, we have shown the design issue of S-DES and how it works in enciphering and deciphering message. With 10-bits key, different kind of attacks have been done successfully on S-DES. These including brute force attack, chosen plain text attack, chosen cipher text attack, and known plain text attack. Having this kind of characteristic, we can use S-DES as a first step in learning about cryptanalytic technique. Furthermore, this technique can also be used to attack more complicated cryptography algorithm, in this case it will be DES.