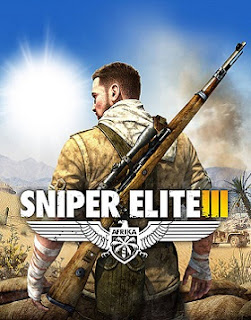 GamePlay
The game retains and builds on the mechanics of Sniper Elite V2. Players go through large battlefield maps based on the North African conflict.
The sniper rifle is the player's primary weapon, though additional weapons, including submachine guns and pistols, silenced or not depending on the situation, are available. In addition to hand grenades, the player can deploy tripwire booby traps, land mines and dynamite. Binoculars can be used to tag enemies, displaying their position and movements. The player-character must hold their breath to properly line up the shot. A red icon appears in the scope, marking the projected point of impact. There are weapon parts spread out all over the game, found when looting dead enemies, allowing players to customize their weapons in the predeployment menu; the menu also allows equipment loadouts.
Stealth mechanics have been reworked. An eye icon squints or opens to denote the player's level of detection by the enemy. Enemy soldiers will also have a circle meter over their heads to indicate alert status. Players are also forced to relocate periodically to prevent detection with a white ghost image to mark their last known position and the enemy will search a wider area. As in the previous game, loud sounds may be used to mask sniper shots.
A points system is instituted for actions such as stealth close-combat or sniper kills, with the points accumulating towards promotion to higher ranks. Players can go around the map to collect special reward items such as collectors' cards and unlock sniper nests. Journal pages also provide further backstory into the events of the game.
V2's X-Ray kill cam system is retained as well. Where the previous game only shows the body's internal structure at point of impact, the new game expands to visualize the rest of the cardiovascular, skeletal, and muscular systems. The player can still target vehicles, but now has a chance to shoot the engines and disable the vehicle.(Wikipedia)